On the subject of biases, first, we should define what are fallacies. The reasoning is the base of the language. Language is the one that makes us different from other species. Reasoning helps us define what is true works and what's not. Reasoning happens inside our head and we describe it by using the language, and as a result, arguments beget. The fallacy is a wrong argument, the argument that does not work. It may be deceptive, manipulative, or just mistaken because of having dangling reasoning.

The most common breakdown of fallacies is formal and informal, Although there are other breakdowns like what Aristotle had done; linguistic and non-linguistic fallacies. People sometimes underestimate the power of fallacy. We make fallacies in our routines. from simple to complex ones. But none of them are as harmful as the oversimplification.

As cognitive science researchers suggested [1], the number of individual variables human can mentally handle while trying to solve a problem (like baking a lemon meringue pie) is relatively small: Four variables are difficult; five are nearly impossible. So when it comes to the success of Apple, people oversimplify a complex path to just the success of one person. As a result, people would miss the consequence of remove or add something from their daily life. Think about Tesla, many believe that they produce cars with near to zero waste. But particle pollution from electric cars could be worse than from diesel ones (Because of their emissions from wear of brakes compared with conventional vehicles).

In our era, the increasing availability of information leads us to simplify any complex structures. Illusory truth effect [2] lead us to believe there is one single factor that cause something, without any further process. Repeated statements receive higher truth ratings than new statements, and then they become facts. For Hacking the non-improvement biases, we should deep down to unknown statements and analyze them and then, accept them. Hopefully, there are many valid sources, and google also helps us to find trustworthy sources through its algorithm.

I got a lot of respect for Paul Graham, founder of Ycombinator. He uses the term Independent Mind along with Conventional Mind. he claimed that one of the most revealing ways to classify people is by the degree and aggressiveness of their conformism. He divided people into four types; aggressively conventional-minded, passively conventional-minded, passively independent-minded, and aggressively independent-minded. Some rules are developed by old ones. If you want to make a progress, first you should break them. but breaking the rules is not necessarily leads to progress. When we scrutinize the characteristics of entrepreneurs, we may find them as heretic people, but they just do not fit in our framework.

He argued that independent-minded need to be protected Because they have all the new ideas. To be a successful scientist, for example, it's not enough just to be right. You have to be right when everyone else is wrong. Conventional-minded people can't do that. For similar reasons, all successful startup CEOs are not merely independent-minded, but aggressively so. So it's no coincidence that societies prosper only to the extent that they have customs for keeping the conventional-minded at bay.

How does this happen? why some become frontiers and change the way we think? I think that fallacies and reasoning are the pivots of matter. Although I believe that you can't improve this skill by just practice, you could at least perform better by know more about the fallacies that would happen. By asking the question of can I am wrong and self-criticizing you will improve this ability to see unseen deepness.

We could not experience our lives from top to down. It's a common fallacy that we fall into. When we want to analyze a historical situation, we put our self in the shoes of the people in that era and then we assess the occasion. One of the fallacies that I've faced during my experience is that people try to model their perspectives from a top-down experience, and not the bottom-up. Their common fallacy is about the philosophy of the business, the culture, and an invisible line between sciences. They underestimate the role of the language in their modeling and it has consequences. In Wish Work, we try to break these invisible lines. There are philosophies that lead us, not roles and titles, not an organization chart. I think that organization chart and modeling the culture is an awful idea. because you try to pour the air in the bowl. It's near to impossible. It's not because you can't, It's because you shouldn't. I know that when you model something you give a better perception, but that's not work in this case. So instead of this, we come up we the idea of breaking the philosophy. the philosophy of our works. 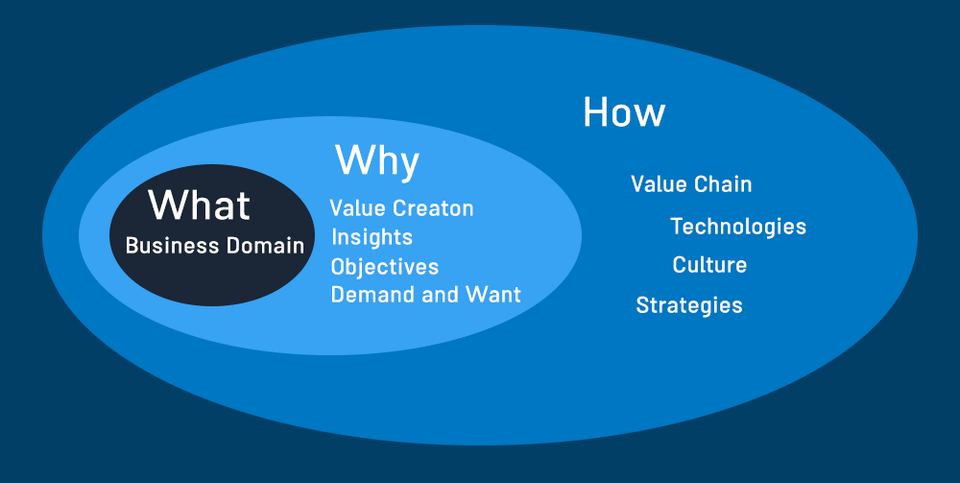 This image is a model and it has its own problems also. In addition, we are biased and I admit that (which contradicts the title of this article). but at least we try not to develop a useless framework. We came one step behind and asking ourselves what are we going to do? why we do it and how we will do it. Then terms, tasks, and descriptions emerged. Hence, sometimes we try to re-engineer our philosophy and models to reduce fallacies and costs that may face. But how we do that? by hacking the bias.